ApoSandbox is a repeatable quest.

Bonus of the Day

Step 1: Obtain the Quest and Give the Daily Offering

Step 2: Speak with the Meridia of the Day

About the Meridia of the Day 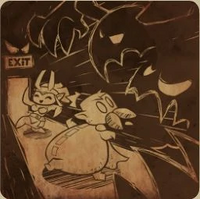 Need a Xelor to repair your clocks? A Feca to take care of your brats? An Enutrof to squander your money? Pray to Martero, the Meridia of Favours! He makes people helpful and is ready to help you on any occasion! Martero: THE specialist in personal favours! He is celebrated on the 4th of June, the day of the Guardian Party.

He loves to render services, without worrying about the consequences. When Rushu came to see him in order to conquer the World of Twelve, Martero found him an army of temporary Dopples. Fortunately, they had not undergone intensive military training.

ApoSandbox means "hammer" in Spanish, which is a very helpful tool. However, as regards the relationship between the name of this Meridia and anybody associated with Ankama, we look forward to discovering. Perhaps you will find the secret to this name.


How you can learn more about the Krosmoz...
Many NPCs and items are named after, or refer to, popular culture, as well as people associated with Ankama, its various products and media, referred to as the Krosmoz, including: Dofus, Dofus 1.29, Dofus Touch, Dofus Pets, Dofus Battles, Krosmaster and Wakfu (as well as other older games, such as Wakfu Raiders, which are no longer available), in addition to graphic novels, manga, cartoons and films, such as Dofus: Kerub's Bazaar, Wakfu (animated series) and Dofus Book I: Julith. If you want to learn more about Dofus and the Krosmoz, particularly about the history of the World of Twelve, please refer to Le Guide du Krosmoz.

Retrieved from "https://ankama.fandom.com/wiki/ApoSandbox?oldid=800"
Community content is available under CC-BY-SA unless otherwise noted.